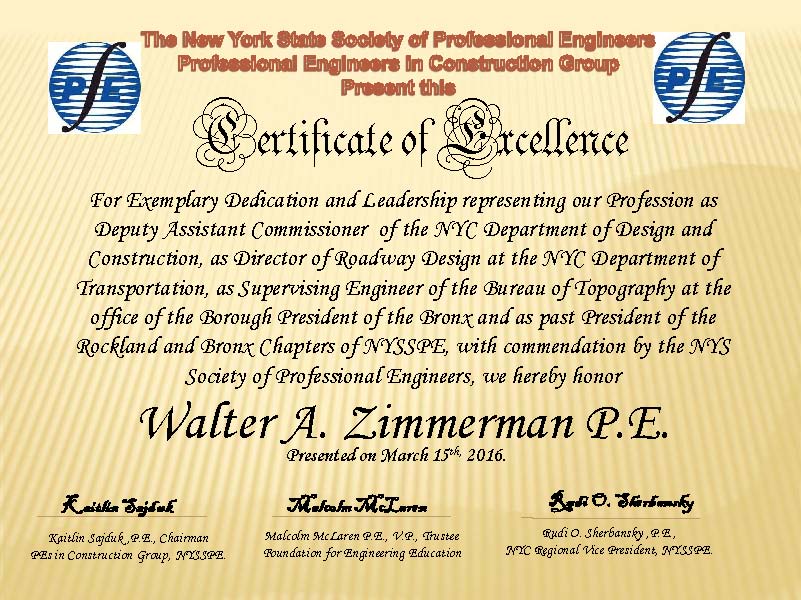 The Certificate of Excellence was presented by Mal McLaren P.E., Trustee of the Foundation for Engineering Education (FEE) and by Rudi O. Sherbansky P.E., New York City’s Regional Vice President of NYSSPE and Chair-elect of the PE’s in Construction Group of the National Society of Professional Engineers (NSPE). The Certificate which is issued annually by NYSSPE’s Professional Engineers in Construction Group (PEC) to distinguished members of the engineering society, was also endorsed by the Chair of PEC, Kaitlin Sajduk P.E. and presented to Mr. Zimmerman on March 15, 2016.

As Director of Roadway Design at the NYC Department of Transportation (1990 – 1996), Mr. Zimmerman reviewed consultant work, set standards and monitored design projects; acted as hearing officer for DOT’s EDPI; represented DOT to public, community boards and other agencies; prepared legal documents relating to acquisition and advised Law Department on engineering matters; Mr. Zimmerman also assisted the Bureau of Bridges in setting up and training a specialized section of bridge design engineers in the mapping and acquisition of property and easements for various bridge projects, as well as generated reports and documents for specific assigned projects.

The New York State Society of Professional Engineers (NYSSPE) is an organization consisting of engineering professionals from all disciplines and employment sectors that advocates licensure, promotes the ethical, competent and lawful practice of engineering, and enhances the image and interests of its members and the engineering profession. NYSSPE represents professional engineers (totaling more than 25,000 licensees in New York State) practicing in all disciplines (civil, structural, mechanical, electrical, geotechnical, environmental, etc) and practicing in all practice settings (private sector consulting, industry, government, and education).

Note: NYSSPE facilitates posting on this news blog, but the views and accounts expressed herein are those of the author(s) and not the views or accounts of NYSSPE, its officers or directors whose views and accounts may or may not be similar or identical. NYSSPE, its officers and directors do not express any opinion regarding any product or service by virtue of reference to such product or service in this blog.