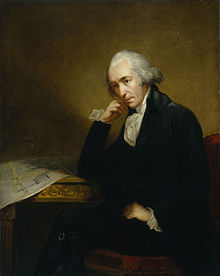 NYSSPE’s Engineer of the week features James Watt, a Scottish inventor and Mechanical Engineer born on January 19, 1736. He was an instrument maker whose steam engine contributed substantially to the Industrial Revolution. Watt’s father ran a successful ship and house building business so from an early age James Watt had a lot of experience with building models. At the age of 17, he decided to become a mathematical-instrument maker.

While working on the Newcomen steam engine in May 1765, he became very interested in the amount of steam wasted and set out to solve this problem. Watt came up with a separate condenser and built an engine to support it. This is now known as his first and greatest invention. His patent for the invention is recognized as “A New Invented Method of Lessening the Consumption of Steam and Fuel in Fire Engines.”

In his later years, the increased demand for several types of mills (paper, flour, cotton, etc.), distilleries, canals, and waterworks consequently increased the popularity and demand for Watt’s steam condenser. By 1970, Watt became a very successful man having received many royalties on his patents.

The development of Watt’s engine was a defining feature of the Industrial Revolution. During his life, Watt made many contributions to science and industry. The watt, the unit of power in the International System of Units is named after him. Watt passed away on August 25, 1819 at the age of 83.