The New York State Society of Professional Engineers (NYSSPE) is proud to announce that the 5-Mile Belt Parkway Bridge Replacement & Reconstruction Project has been selected as the 2019 Construction Project of the Year.  The Award recipients include the New York City Department of Transportation (NYC DOT) as project owner; AECOM, Hardesty and Hanover, and HNTB as the project design firms; and Greenman-Pedersen, Inc. (GPI) and Thornton Tomasetti (Weidlinger) as Construction Managers and Resident Engineers.  Among others, the project’s general contractors CCA Civil, Inc., Halmar International, and Michels of the Mill Basin Bridge Constructors (MBBC) will be recognized.  The award will be given out at the NYSSPE Annual Installation & Awards Reception & Dinner which will be held on Thursday, June 7th, 2019 at the Holiday Inn Conference Center, 232 Broadway, Saratoga Springs, NY 12866.  The event is open to the public.  For more information about the Awards Reception and Dinner event, click here.

The 5 Mile Belt Parkway Reconstruction Project is about the reconstruction of a vital artery of a historic parkway, which spans over a 5-mile strip of environmentally sensitive coastland of New York City.  Located in a dense urban setting, the reconstruction project remained open for approximately 150,000 commuters per day, necessitating innovative design and work methods.    The project required diligent coordination of the work between the City and some of our nation’s most prominent engineering firms. The scope of the $780 million infrastructure project included: the reconstruction of five (5) unique bridges in critical need of repair originally built circa 1940; and the complete replacement of the connecting roadways, bike path, and ramps.  The complete surface landscaping and final tree planting of the project was being completed in late 2018.

NYC DOT Division of Bridges is responsible for the design, construction, rehabilitation, reconstruction, maintenance, operation, and administration of the 784 bridges, 5 tunnels, and 53 culverts located citywide, that are under the jurisdiction of the agency.  Included in this inventory are the majority of the original 1940’s bridges of the Belt Parkway.  The Belt Parkway is the namesake for a series of connected highways that form a belt-like circle around the New York City boroughs of Brooklyn and Queens. The parkway was originally conceptualized in the 1930’s by the City’s Planning and Parks Commissioner, Robert Moses.

The replacement of the five (5) bridges in the project were packaged together in a single corridor-wide replacement program that brought the corridor into full compliance with current state and federal standards.  This included compliance with standard width of traffic lanes, requirements for safety shoulders and super-elevation of curbing roads and bridges, realignment of approaches to improve sight distances, and new concrete median barriers. 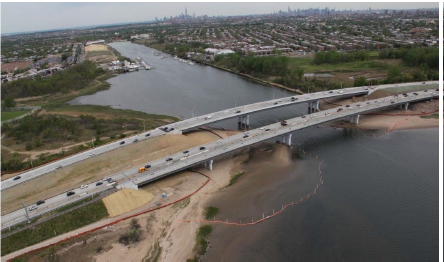 The five (5) bridges in the reconstruction project span over four waterways and one roadway.  The design and replacement of the old Belt Parkway bridge over Paerdegat Basin was performed by NYC DOT – In House Design team, which opted for independent eastbound and westbound replacement bridge structures as shown in the captioned photo. The Eastbound bridge also carries a dedicated, 12 foot wide, barrier protected, bicycle and pedestrian path.  The joint venture by the design firms of GPI and AECOM (“CTE”) was selected to provide resident engineering and construction inspection services.  An innovative design feature of the Paerdegat Basin Bridges was the design of the two (2) bridge structures on a split alignment, which allowed the existing bridge to remain in service, while the new bridges were constructed “off-line”.

George Pappas, P.E., Principle and Project Manager and James Dineen, P.E., Resident Engineer, were of the distinguished design professionals of Thornton Tomasetti who contributed as project manager and resident engineer for the project.

The distinguished design professional at Hardesty & Hanover that contributed in the project was Charles Gozdziewski, PE, as Project Principal.

Note: NYSSPE facilitates posting on this blog, but the views and accounts expressed herein are those of the author(s) and not the views or accounts of NYSSPE, its officers, or its directors, whose views and accounts may or may not be similar or identical. NYSSPE, its officers, and its directors do not express any opinion regarding any product or service by virtue of reference to such product or service on this blog.