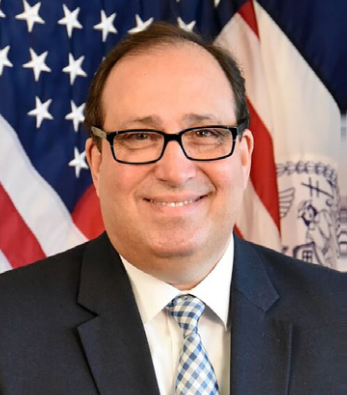 On Tuesday November 17, 2020 at 5:30 PM, NYC DEP Commissioner, Vincent Sapienza PE will make an  online presentation on the topic of the engineering challenges of the Delaware Aqueduct Bypass Tunnel project.  The $1 billion Delaware Aqueduct Bypass Tunnel project, which is the largest repair in history of NYC water supply, is ahead of schedule and on budget.  The 2.5-mile-long bypass tunnel is 600 feet under the Hudson River from Newburgh to Wappinger. When the project is finished in 2023, the bypass tunnel will be connected to structurally sound portions of the existing Delaware Aqueduct on either side of the Hudson River to convey water around a leaking section of the tunnel.  The 85-mile-long Delaware Aqueduct is the longest tunnel in the world, , approximately 11 miles longer than water tunnel build in the early 1980s in Finland.

Registration to this 1 hour (1 PDH) virtual meeting presentation can be made at the following link:  https://nysspe-nyc.org/events/monthly-dinner-social/

The Delaware Aqueduct bypass tunnel repair project was necessitated after discovering two leaking sections of the Delaware Aqueduct; one in Newburgh, and the other in the Ulster County town of Wawarsing since the early 1990s. The leaks release an estimated 20 million gallons per day, about 95 percent of that escaping the tunnel through the leak near the Hudson River in Newburgh. DEP has continuously tested and monitored the leaks since 1992 and monitored the size of the cracks in the aqueduct and the rate of leakage to have remained constant over that time.

The aqueduct bypass tunnel construction began in 2013 with the excavation of two vertical shafts in Newburgh and Wappinger to gain access to the subsurface. These shafts, 845 and 675 feet deep respectively, were completed in 2017. Workers then built a large underground chamber at the bottom of the Newburgh shaft to serve as the staging area for assembly and operation of the tunnel boring machine, and as the location from which excavated rock is brought to the surface by underground trains and a large crane.  Once the bypass tunnel is nearly complete, the existing tunnel will be taken out of service and excavation will begin to connect the bypass tunnel to structurally sound portions of the existing aqueduct. While the Delaware Aqueduct is shut down, work crews will also enter the aqueduct in Wawarsing to seal the small leaks there, roughly 35 miles northwest of the bypass tunnel. 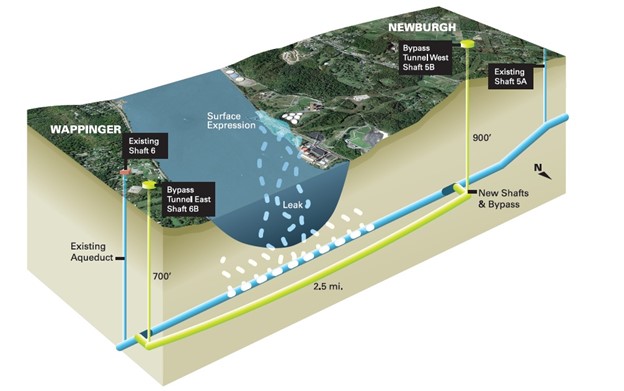 The Delaware Aqueduct is an 85-mile-long tunnel that delivers drinking water from Rondout Reservoir in Ulster County to Hillview Reservoir in Yonkers. The aqueduct typically conveys about 50 percent of New York City’s drinking water. The Delaware Aqueduct put into service in 1944 when New York City Mayor Fiorello H. La Guardia opened a set of emergency gates to channel the Rondout Creek directly into the new aqueduct.

The NYC DEP manages New York City’s water supply including more than 70 upstate communities and institutions in Ulster, Orange, Putnam and Westchester counties who consume an average of 110 million total gallons of drinking water daily from New York City’s water supply system. This water comes from the Catskill, Delaware, and Croton watersheds that extend more than 125 miles from the City, and the system comprises 19 reservoirs, three controlled lakes, and numerous tunnels and aqueducts. DEP has nearly 6,000 employees, including almost 1,000 scientists, engineers, surveyors, watershed maintainers and other professionals in the watershed. In addition to its $70 million payroll and $168.9 million in annual taxes paid in upstate counties, DEP has invested more than $1.7 billion in watershed protection programs—including partnership organizations such as the Catskill Watershed Corporation and the Watershed Agricultural Council—that support sustainable farming practices, environmentally sensitive economic development, and local economic opportunity. In addition, DEP has a robust capital program with $20.1 billion in investments planned over the next decade that will create up to 3,000 construction-related jobs per year. 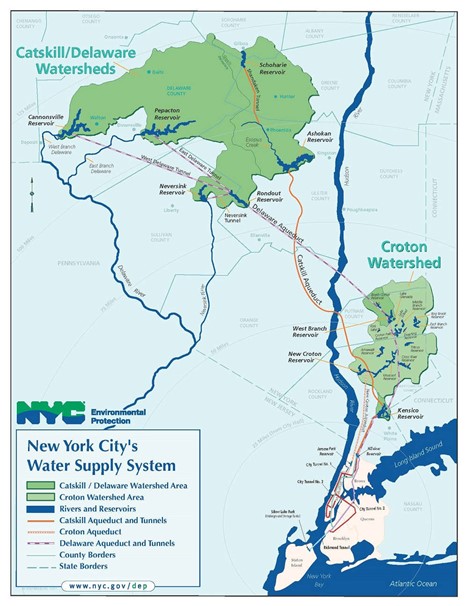