The Federal Highway Administration is turning to risk-based, data-driven ways of evaluating and rating bridges. Shay Burrows, team leader for structures safety and management for the FHWA, said that the agency is replacing traditional sufficiency rating numbers with simpler terms such as “good,” “fair,” and “poor” in describing bridges.  Speaking to attendees of the International Bridge Conference last month, he noted the recently issued “Refined Analysis in Bridge Design and Evaluation” manual from the FHWA, which provides guidelines for engineers to use “refined” analysis in modeling bridges.

The manual states: “Current … Bridge Design Specifications feature a reliability-based approach to bridge design…and limit state design with conservatism built in to envelope the limits of applicability and consider all the relevant parameters. Conservatism always adds unnecessary cost, which may have serious implications for owner-agencies with limited budgets.”  Moreover, the manual states that “designers …focus on developing and using complex automated calculation tools to execute the necessary code checks rather than performing meaningful structural modeling to better understand behavior and address the limit states that are being evaluated. This often hides the controlling factors and hinders the development of new bridge innovations in general. A properly and efficiently executed refined analysis can provide substantially better information about the state of stress in a bridge and allow for more cost-effective and reliable design.” END_OF_DOCUMENT_TOKEN_TO_BE_REPLACED

The above video is a New York State Society of Professional Engineers (NYSSPE) legislative update . The video is presented by Anthony Fasano, P.E., NYSSPE Executive Director and NYSSPE Legislative Counsel Mark Kriss, Esq and focuses on the topic of Design Build in New York.  There is an extensive Design Build FAQ on our website here.

Here is a time-stamped breakdown of the video to make it easier to find the sections of interest to you: END_OF_DOCUMENT_TOKEN_TO_BE_REPLACED 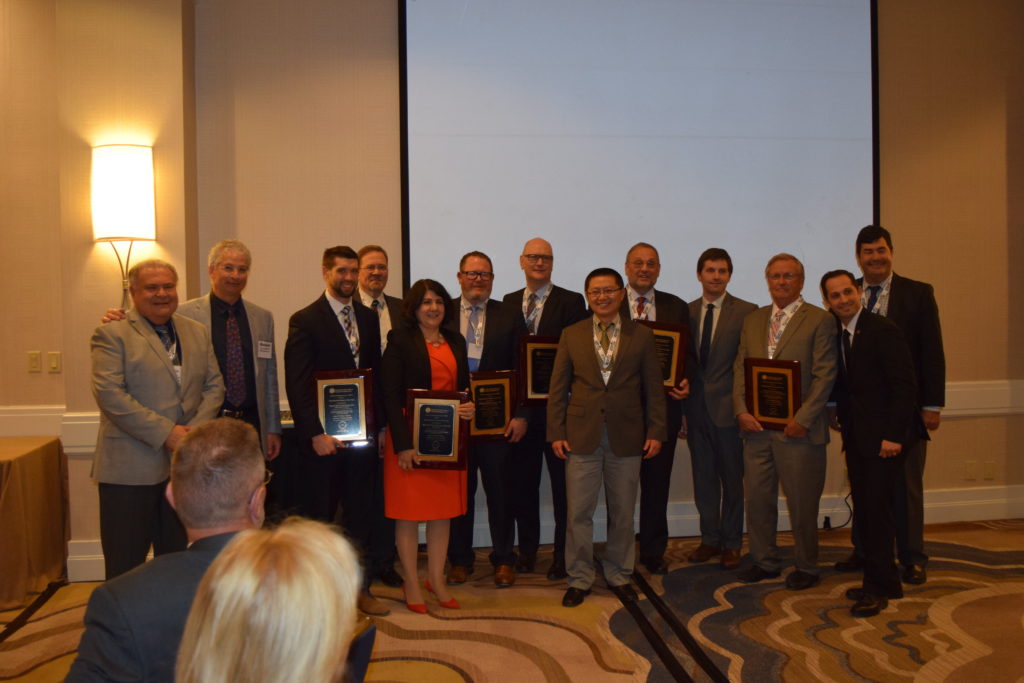 The New York State Thruway Authority (NYSTA) is replacing the existing Tappan Zee Bridge with a new 3.1-mile state-of-the-art, twin-span bridge across the Hudson River between Rockland and Westchester counties.  The $3.98 billion New NY Bridge project is the largest single design-build contract for a transportation project in the United States. Located 20 miles north of New York City, the cable-stayed span crosses one of the widest parts of the river and will be the largest bridge in New York State history. Construction started in fall 2013 and the project remains on schedule and within budget. More than 6,300 people have worked on the bridge to date. END_OF_DOCUMENT_TOKEN_TO_BE_REPLACED

The above video is a New York State Society of Professional Engineers (NYSSPE) legislative update on Design Build with respect to the recent budget bill. The video is presented by Anthony Fasano, P.E., NYSSPE Executive Director and NYSSPE Legislative Counsel Mark Kriss, Esq.

You can also click here for a written summary of the 2017 budget bill as enacted written by Mark Kriss, Esq.

Here is a time-stamped breakdown of the video to make it easier to find the sections of interest to you: END_OF_DOCUMENT_TOKEN_TO_BE_REPLACED

The above video is a New York State Society of Professional Engineers (NYSSPE) legislative update on the current legislation that is proposing to impact Design Build regulations in New York State.  The video is presented by Anthony Fasano, P.E. NYSSPE Executive Director and NYSSPE Legislative Counsel Mark Kriss, Esq.

Here is a time-stamped breakdown of the video to make it easier to find the sections of interest to you: END_OF_DOCUMENT_TOKEN_TO_BE_REPLACED

It is important to note that, in general, NYSSPE is in favor of Design Build, as long as it is done in a way that there are proper safeguards in place to protect the public.  Design Build is a complex area and there are many parameters to be aware of.  You can view a comprehensive FAQ on Design Build in New York here.
END_OF_DOCUMENT_TOKEN_TO_BE_REPLACED

On behalf of the New York State Society of Professional Engineers (NYSSPE), in furtherance of public health, safety and welfare, we are writing in OPPOSITION to the above referenced bill. NYSSPE is a professional trade association representing the interests of its members and more generally the interests of all professional engineers (totaling more than 25,000 licensees in New York State) practicing in all disciplines (civil, structural, mechanical, electrical, geological, environmental, etc.) and practicing in all practice settings (private sector consulting, industry, government, and education.)

A 7590, in relevant part, would vest a number of New York City agencies with the authority to utilize a unique design build project delivery methodology for infrastructure public work projects. Design-build generally is a project delivery system wherein the design and construction of the project proceeds concurrently. This design-build process affords a faster construction timetable than the timetable required by the traditional design-bid-build delivery methodology. The latter entails the production of a set of plans and specifications, which are then offered for bid. (The traditional design-bid-build method construction is predicated upon detailed plans, specifications and performance criteria which clearly define the scope and components of the project before actual construction is commenced.) END_OF_DOCUMENT_TOKEN_TO_BE_REPLACED

Pursuit to current law construction in both the public and private sectors must utilize a design-bid-build construction methodology.  In New York, design build has only been authorized by virtue of project specific enabling legislation, or by virtue of 2011 legislation establishing a pilot project employing a limited number of entities on a trial basis respecting highway and bridge projects.  The 2011 pilot was extended last year and a report on the use of design build is awaiting delivery to the Legislature.  END_OF_DOCUMENT_TOKEN_TO_BE_REPLACED

Pursuant to current law construction undertaken by the aforementioned municipal entities must utilize a design-bid-build construction methodology.  In the absence of express quality assurance safeguards as detailed below, NYSSPE opposes A7590.

Design-build is a project delivery system whereby a single entity is contractually responsible for both the design and construction of the project.  It differs from the design-bid-build, which entails the production of a set of plans and specifications, which are offered for bid.  Proponents of traditional design-bid-build argue that the interests of the owner are better protected using the design-bid-build model which emphasizes the role of the design professional as the owner’s expert.  Supporters of design-build cite savings attributable to a faster construction timetable and the ability to provide for one-stop shopping. END_OF_DOCUMENT_TOKEN_TO_BE_REPLACED

Of significant interest to NYSSPE and its membership is the renewal of the DESIGN BUILD pilot program first enacted in December of 2011.

S4610-A / A6721-A re-authorizes the use of design build for design and construction projects if undertaken by a number of state agencies and authorities. The legislation is virtually identical to the original pilot program, provided that the 2015 legislation calls for consultation with relevant local labor organizations and the construction industry. The 2015 legislation sunsets in April 1, 2017.

The design build entity can be a single entity, such as a grandfather corporation permitted to offer and provide professional engineering services pursuant to Education Law Section 7209 (6), or may be comprised of more than one entity, such as a general contractor and a firm authorized to provide professional engineering services.